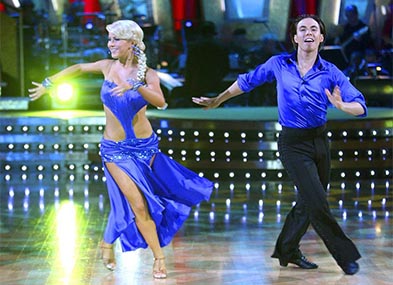 The cha-cha-cha is both a dance and a musical genre, which was invented in 1953 by the Cuban violinist Enrique Jorrin of the America Charanga Orchestra. The word Cha-cha-cha comes from the rhythm and sound that the güiro makes and the shuffling of the dancers feet.

Enrique Jorrín, noticing the difficulties that dancers had with the Danzón-Mambo dance, decided to create a new, simpler form based on melodies, so that the dancers could move with the rhythm rather than dealing with the difficulties of missed beats.

The combination of a melody with timing and the accompanying dance became a genre in its own right and was named Cha-cha-cha.

Cha-cha-cha is a relatively new discipline, but the steps are a little bit more complex than those of other dances- such as Rumba, Mambo, Salsa, etc. The main characteristic of the routine is that there are always four beats for the dancers to keep time to.

Beat 2: The male dancer steps forward with the left foot, transferring the weight of his body forward, while the female steps back on her right foot.

Beat 3: The male dancer balances the weight of his body backwards with his right foot, while the female does it with her right foot.

They then start again, reversing the roles.

The Cha-cha-cha music is very appealing, and its main characteristic is its irregular counting. It goes: “two-three”, “four-and-one”, the last corresponds to the beat of “cha-cha-cha”. The cha-cha-cha tempo is around 30 beats a minute.

If you are an admirer of the Cha-Cha-Cha then our dance counsellors will be delighted to give you the chance to get closer to what you love the most by providing you with all of the necessary means to master this dance.

¡Vamos a bailar! The Cha-Cha-Cha is waiting for us!

Do you Contemporary Dance?