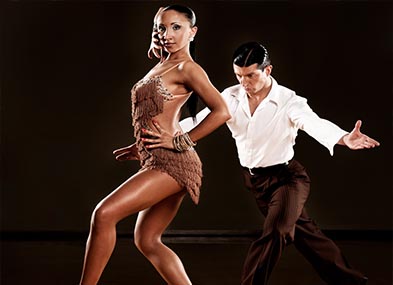 The Rumba originated in Matanzas, Cuba, in the early 1800’s and the word “Rumba” is a derivation of the Spanish word “rumbo”, which means “the way”. It was originally used to describe late night parties in which people got together in large, empty spaces to sing and dance. At first, in Rumba music, the rhythm is slow but, as the song progresses, the tempo increases to create a fast rhythm. When the dance first began, drawers were used as percussion, but today congas are more commonly used.

Did you know that there are several types of rumba?

In the 18th Century, the Cuban Guaracha was adopted by gypsies in Seville, Spain and later became known as the Rumba Flamenca. It is a very lively type of music and is not very complicated, making it ideal to dance in groups. Famous singers associated with the Flamenco Rumba are The Gypsy Kings, Paco de Lucia, and Paco Pena.

Circa 1930, the Cuban Son (a type of music) was renamed “the Rumba” in the United States. Through Xavier Cugat’s promotion of the music and dance, people started to dance the Rumba in ballrooms. Nowadays, the traditional style, in which the woman lures the man with her charms as a subtle sign of power and the game of seduction is played amongst the dancers, still exists. The Rumba is a passionate, sensual dance and shows the passion between the two dancers.

Around 1940, the Catalan Rumba was born in Barcelona, Spain. It is an alternative form of the Flamenco Rumba and includes a technique called “ventilador”, where the guitar as an element of percussion.

Are you interested in a Rumba class? Contact one of our dance counsellors at Dance Classes Madrid!

Have you ever danced Merengue?